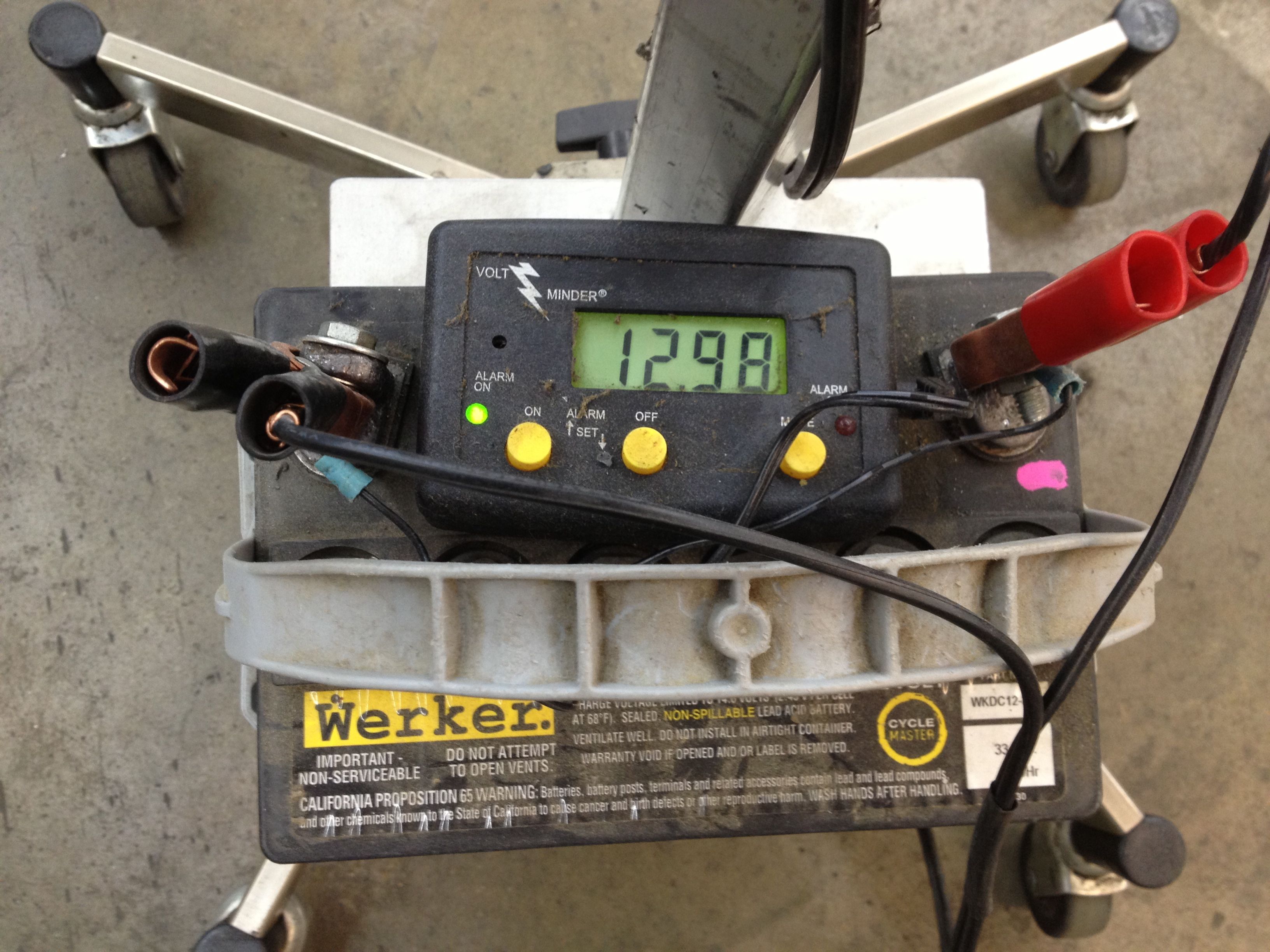 It was a big hailstorm with lots of cars. Most were paintless repair candidates, but many would need glue pulling dent repair too.
Made me so glad I cut the electric cord and now use a 12 volt glue gun. Having the tray right there nearby is a huge time saver.
The battery weight in the bottom tray makes the glue cart really stable too.

With so much work, we spent many days working late into the night.
I arrived early one morning, and to my horror, I had left the paintless glue gun connected to the battery all night.
It was still warm, but barely. So I took the battery over to the automatic charger, and it wouldn’t even charge it.
Just a light saying “no connection”. What?
Grab the voltmeter, battery is at 3 volts. Not good.
The only option I have now is putting it on the old school car charger on trickle. This brought it back up to 11 volts after a few hours. Now the auto charger could “see” it as a battery. I leave it connected a few hours to top it back off.
But that battery will never be the same. I know it. I’ve seen it before.
Running it down to such a low voltage makes the plates dirty inside and changes its internal resistance. Which is a techie way of saying “it won’t hold a charge as long as before.”
Not to mention the effect a 3 volt power source has on a 12 volt tool.
I told you in this article what an expert told me to make batteries last longer.
Since then, I’ve been on a quest to find a system to protect me from myself, to save my batteries from my forgetfulness.

The evolution of battery protectors
First, we tried these “Volt Minders” (no longer available). They have an alarm and a constant voltage read out, but consume very little power on their own. The voltage alarm is adjustable, and does indeed tell me when to change them. Trouble is, an alarm is only good when someone is around to hear it. You need something to disconnect when you forget to.
So the next step was a trip to the Recreational Vehicle supply for a Battery Protector (T3).

This device was made to keep enough juice in your RV’s batteries to start it the next day. It has a cutoff around 12 volts, which seems high, but remember, chargers and batteries rated at 12 really charge and run for a time at 13.8 volts. But I knew I could take batteries down to 11 or so safely and this would buy some time between changes. Trouble is, these RV style protectors are not adjustable. They also will cut you off without warning, unless you hear the click of the relay opening.

Then I found this protector, the Sure Power Low Voltage switch. Though preset at factory, these have a potentiometer (like a volume adjuster) you can turn with a screwdriver and set the voltage to cut off where you want. It has the alarm, too, but even better, it also gives a warning tone to let you know its about to cut you off.
This keeps you from walking over to a cold glue gun.
At a minimum, I would recommend having one on your glue gun. But if you’re using smaller batteries, ideally you want one for each light too.
If you have multiple items on battery power as we do, the price can add up. The RV battery protector is at $80 and the adjustable SurePower is at $60 or more new.
Which is why I was happy to find them used for such a good price $10. I picked up 4 and all work well.

These are meant to go between the battery and the tool, so they do require some extra wiring, but worth it for peace of mind.
If you want to add another wire, there is even an override which will make it run for a few minutes longer. You could also just wire around it for short periods if you ever need to.
Since being cordless adds so much to the bottom line in paintless dent repair, I consider batteries one of the most important paintless tools in my kit.
Making them last long as possible just makes good sense.

Hire a Robot to Run Your PDR Business? PM100

Your Google Listing (Might) Really Be in Danger PM98

Apps and Office Tech We Use in our PDR Company – PM96

This site uses Akismet to reduce spam. Learn how your comment data is processed.